CONESUS – The Town of Conesus will be taking a second look into a code violation at the property where a charity fixes up cars and furniture and gives them to veterans in need.

Town Code Enforcement Officer Bob Lennington says that Operation Build Up, the facility on Pucker Street in the area of Sliker Hill Road run by Justin Cogswell, is welcome but may be just less than 40 feet over the line into residential use.

“We had a very productive meeting Monday night with Justin where he pled his case and we pled ours, and we’re moving toward a resolution without conflict,” said Lennington. “What it boils down to is a less than 40-foot discrepancy over whether he is in mixed use or agricultural and residential zoning. So I said ‘let’s have the town pay for an independent surveyor to measure it again, so there’s no question,’ and Justin can appeal our finding to the ZBA.”

Lennington re-iterated that the goal is to come to a resolution without having to stop Operation Build Up’s work.

“I’m also kind of going up a couple rungs on the ladder to the State Department and the State Association of Attorneys to see if we can consider the facility something other than an auto repair facility, which is how our current interpretation has it,” added Lennington.

The code enforcement investigation began in October 2017 based on phone calls from neighbors.

“I like to tell people we could drive up to any given property and probably find one code violation somewhere, but we don’t drive around looking for violations,” said Lennington. “But we investigate every call, and when we do find violations we have to come to a resolution.”

About 20 veterans and members of local American Legions and VFWs showed up to Monday night’s meeting ready to vocally lend their support to Operation Build Up, but were not allowed to speak since Monday’s meeting was not a public hearing.

Operation Build Up is on the agenda for a public hearing on Feb. 26, where the public can make comment to the Town Board.

“We support veterans and the operation, its very much welcome and commendable,” said Lennington. “But as Code Enforcement Officer I have to say ‘yes or no’ if a parcel complies. It’s very black and white, and the code is the code.”

Operation Build Up’s mission is to ‘have an impact on the 22 veteran suicides per day and homelessness statistics by surprising veterans with the basic items needed for survival in a civilian lifestyle.’ Their goal over the next year is to surprise over 150 veterans with vehicles and complete home furnishings across New York state. 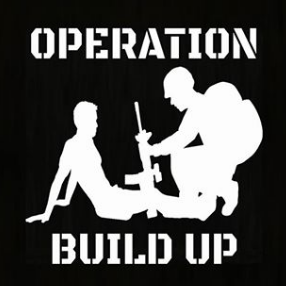