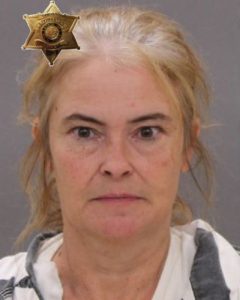 Sheriff Thomas J. Dougherty reports the arrest of a Conesus resident on felony DWI and felony AUO charges following an investigation into a motor vehicle crash.

On August 31st, 2021 at approximately 8:30pm, Sheriff’s Deputies responded to the area of Story Road, in the Town of Springwater,
for the report of a motor vehicle crash involving one vehicle.  The on-scene investigation revealed that a vehicle being operated by Ann M. Rauber, age 47 from Conesus, NY, was traveling on Story Road when the vehicle she was operating left the roadway and struck an embankment. Rauber was suspected of being under the influence of alcohol, which prompted a DWI investigation.

Rauber was transported to Strong Memorial Hospital with minor injuries. While at the hospital, Rauber was offered to provide a
blood sample to determine her blood alcohol content (BAC) however, Rauber refused.  A records check revealed that Rauber had a revoked driver’s license as a result of previous DWI related offenses. The check also revealed that Rauber had a previous conviction for DWI on March 11th, 2020. Rauber was arrested and charged with felony Driving While Intoxicated and felony Aggravated Unlicensed Operation of a Motor Vehicle in the 1st Degree.

Rauber was transported and turned over to Central Booking Deputies at the Livingston County Jail for processing and pre-arraignment
detention. The District Attorney’s Office was contacted in regards to bail due to the felony level charges. It was recommended that
Rauber be held without the possibility of bail due to having two prior felony convictions.