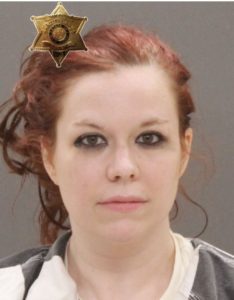 Sheriff Thomas J. Dougherty reports the arrest of a Conesus NY resident on felony charges after an investigation by the Sheriff’s Office.  It is alleged that between July 20, 2020 and July 22, 2020, 34 year old Autumn M. Hanna wrote five (5) personal checks at a grocery store that had insufficient funds. It is further alleged that Hanna signed another person’s name to the checks when she wrote them.

On October 15, 2020 Sheriff’s Investigator Shawn Whitford of the Criminal Investigations Division arrested and charged Hanna with five (5) counts of felony Forgery in the 2nd Degree and five (5) counts of Issuing and Bad Check. Hanna was turned over to Central Booking Deputies at the Livingston County Jail for processing and pre-arraignment detention as the offenses did qualify for pre-arraignment detention under the NYS Justice Reform Act, however, a Judge may not set bail.

Deputy Ryan Bulter of the Patrol Division assisted with the preliminary investigation.