LIVINGSTON COUNTY – A Conesus man is held at the Livingston County Jail on new charges alleging that he again violated an order of protection.

Bucci’s cases began in 2014 when he was extradited from Florida to face charges that he had contact with a former girlfriend, who was the subject of an order of protection. Faced with two trials, he pled guilty to Criminal Contempt in the First Degree and Criminal Contempt in the Second Degree and, though he at one point tried to withdraw his plea, was sentenced to 1 to 3 years in prison with Shock camp eligibility.

Fast forward to December of 2016 and the Sheriff’s Office begins a new investigation into allegations that Bucci violated an order of protection.

The allegations were that Bucci made numerous phone calls, text messages, visits, and physically assaulted the protected party by throwing the person to the ground and choking them.

He is held without bail as is typical for a Violation of Parole charge.

On March 16, 2017, Bucci was arraigned in Livingston County Court on a Superior Court warrant for the felony charges of Aggravated Criminal Contempt and Strangulation in Second Degree. 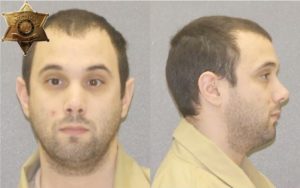