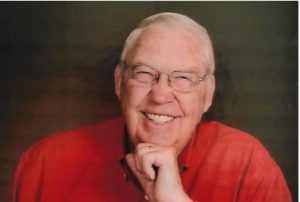 At age 85, Sam passed peacefully at his home on November 11, 2021.  He passed after a period of declining health and was with his beloved wife, Pat and their children.    He was born on January 18, 1936 in Rochester, NY to the late Samuel and Frieda (Hass) McRae.  In addition to his parents he was predeceased by his siblings; Robert McRae, Rita (McRae) Parker, and Lawrence (Virginia) McRae.  Survived by his wife of 56 years Patricia (Hoy) McRae and children; Joseph (Maureen) McRae and Erin McRae both of Honeoye Falls; grandchildren, Ryan and Kathryn McRae; nieces, nephews, and many dear friends.

Sam’s family moved from Caledonia to Conesus in 1946.  As the youngest of four children, Sam grew up fast and helped out on his family’s farm from a very young age.  Sam was a standout athlete for Livonia schools, earning a full scholarship to play basketball for Canisius College and becoming the first member of his family to attend college.  Sam enlisted in the Air Force in 1956 and was stationed first in the US and later in England until 1960.  Upon leaving the Air Force, Sam enrolled in SUNY Geneseo to become a teacher of Special Education.  During his time at SUNY Geneseo, Sam met Pat and they married in 1965.  He taught at the Canandaigua Academy and then at Wayne Finger Lakes BOCES until his retirement.  During his teaching career he also raised his two children and managed his farm.  Sam was a big guy with a big heart, a big appetite and an even bigger sense of humor.  Those who knew him could not escape his good-natured kidding and practical jokes.  Sam left smiles on people’s faces wherever he went.

Family and friends may call on Tuesday, November 16th, from 4-7pm at the Kevin W. Dougherty Funeral Home Inc., 8624 Main Street, Rte 20A, Honeoye, NY.  Sam’s Funeral Mass will be held at 10:30am on Wednesday, November 17th, at St. Mary’s Catholic Church, 8961 Main Street, Rte 20A, Honeoye, NY.  Burial, with military honors, will be held privately at Harder Cemetery, Livonia, NY.  In lieu of flowers memorial contributions may be made to Livingston County Hospice, 2 Murray Hill Drive, Mt. Morris, NY 14510 or to Golisano Children’s Hospital, 150 Crittenden Blvd, Rochester, NY 14642.  To send a condolence or share a memory please visit:  www.doughertyfuneralhomes.com