LIVONIA – The search continues for two missing men thought to have fallen through lake ice on a snowmobile early Saturday morning.

Livingston County Sheriff Thomas Dougherty confirmed that the search has begun again after an overnight hiatus for safety reasons.

“A round table discussion followed with assignments and deployment,” said Dougherty. “Command will be at Vitale Park.”

Earlier on Sunday, Livingston County Sheriff Thomas Dougherty said at the scene that two men in their forties were reported missing Sunday morning.

Teams searched the lake on Sunday with the help of an Unmanned Aerial Vehicle (AUV).

“We took a report of two missing males,” said Dougherty at the scene on Sunday. “Part of the search includes a search of the lake. We did discover two helmets with the use of our UAV.” 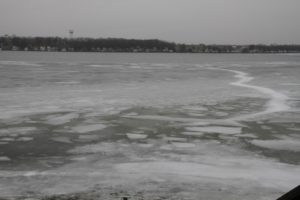