GENESEO – A spokesman for Congressman Chris Collins says that despite weekly demonstrations, the Congressman has no plans to hold any town hall-style meeting.

About 45 protesters re-iterated at their fourth weekly demonstration that they want Collins to hold a town hall to personally hear their political concerns, especially concerning the Trump administration. A total of 19 signatures were dated 02/21 on the sign-in sheet at the front of Collins’ office.

“Collins is still a no-show. He’s absent,” said Erica Elizabeth Ravenwood outside Collins’ Geneseo office. “Today’s rally is to build bridges between the left and right. I want to build bridges with Republicans but not the Trump administration because he just burns bridges as far as I’m concerned.”

Protesters say that there is no reason for Collins not to hold a town hall to personally hear concerns.

“Congress is in recess so there’s no reason for him not to be here,” said Ravenwood.

“I would love it if he would come here, but if he held a town hall anywhere in the district, I’d go,” said Marguerite Thomas.

Collins’ office says that he has never held a town hall and has no plans to do so in the future. Collins’ spokesman said that the Congressman does not see them as an effective way to communicate with his constituents.

“Congressman Collins attends hundreds of district events a year and is regularly in the district meeting with constituents, attending events, and advocating for Western New York. Whether it events like visiting local schools and small businesses, or hearing from veterans groups, Congressman Collins proudly represents the interests of NY-27,” said Michael McAdams, spokesman for Congressman Collins. “The left-wing activists, many of which reside outside of NY-27, organizing these publicity stunts will never be satisfied, despite having multiple opportunities to share their message. The fact is only three months ago, voters in NY-27 overwhelming elected Congressman Collins with 68 percent of the vote.” 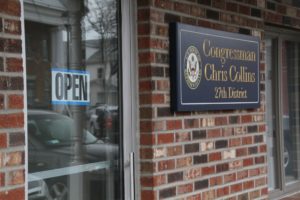