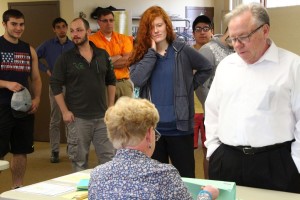 Board of Elections (BOE) Democratic Commissioner David DiPasquale and newly-appointed Republican Commissioner Rebecca Schroeder said that the presidential election likely drew out a high, possibly record high, number of voters county wide. Geneseo registration exploded with the sudden mobilization of student voters at SUNY Geneseo for the spring Village election, where two students were elected to the Village Board of Trustees.

“The big one was of course was the November election,” said DiPasquale, who presented with Schroeder to the Livingston County Public Services Committee Wednesday morning. “Everything ran smoothly for us. We staffed our inspectors well. We had no issues like we had in the Presidential Primary where we had some small lines in Geneseo. Making temporary District 5 at the College really helped out District 2. District 5 had very high turnout, possibly the highest in Geneseo.”

The BOE’s annual statistics included high voter registration, high voter turnout and a record-shattering number of absentee ballots, which came heavily into play in the Geneseo Village election in March.

Livingston County may right now have the highest number of active registered voters in its history.

“Right now we have 39,138 active registered voters,” said DiPasquale. “That’s very high, maybe the highest we’ve ever been. The state also counts inactive voters, so we know we have 40,899 including inactive voters.”

“This is a big year for us because every town will have races on their ballots in November,” said DiPasquale.