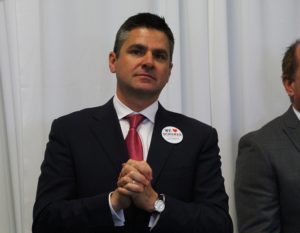 GENESEO – After a disastrous wave of layoffs and more than a year in confusion, Coast Professionals announced Tuesday that it will finally be moving forward with plans to double its size.

Senator Chuck Schumer made the formal announcement Tuesday afternoon to a room packed with employees, some of whom had lost their jobs with the Geneseo branch of the Louisiana-based loan collection agency.

“Coast had a real struggle along the way. Not your fault, not the management’s fault, but they did. And that’s why today’s victory is so much the sweeter, because of the roller coaster ride that we took,” said Sen. Schumer. “The company had to at first slowly lay some people off, and there was worry that everyone here would not have a job. And now of course the great news is that now not only are the 275 jobs saved but over the next two years we’re going to add another 200 jobs.”

Coast first announced its plans to expand in December 2014. When their major contract with the U.S. Department of Education fell through, the financial said that the loss forced the company to make massive layoffs, about 172. Coast sued the Dept. of Education for pulling the contract without explanation. Fortunately, in July 2015, Coast said that they would only be laying off 60, due to ‘business needs and a result of fluctuating account inventories.’ The news that the Department of Education is now re-entering their contract with Coast means that their expansion can continue as planned. Construction on the 15,000 square-foot expansion was going on outside during the announcement.

The renewal of the contract also means that the Livingston County Industrial Development Agency (IDA) is again offering the company financial benefits for its first 10 years.

“The IDA is offering Coast our standard package, if you will, of property, sales and mortgage tax exemption,” said Bill Bacon, Director of the IDA. “We will phase in the taxes as Coast has time to ramp up, starting after five years. […] Because Coast is attached to so many jobs and has such a great return, we’re happy to help.”

Coast certainly seemed to appreciate Sen. Schumer’s advocacy on the federal level to convince the Dept. of Education to renew their contract. Brian Davis, CEO of Coast, came up from Texas for the announcement and Everett Stagg, Chairman of the Board and CFO, came up from Louisiana. Both of them and many Coast employees wore special pins that said ‘We heart Schumer.’ A banner above the podium proclaimed ‘Thank You Senator Schumer.’

Sen. Schumer congratulated Coast in Geneseo for the contract renewal and emphasized that the work done by Coast Professionals is important to the region, college students and the federal government.

“The work done here by you is really, really important because you help students work out a repayment plan that not only allows them to stay in college if they’re still there, but they get their credit rating back, they can then live good lives. And to boot, the federal government gets the money that it’s owed paid back. So it’s a win-win-win. It’s a win for the federal government getting the money paid back, it’s a win for the students because they can work out a plan with your careful guidance on how to repay the debt, and it’s a win for this community because a lot of people are employed doing this good work.” 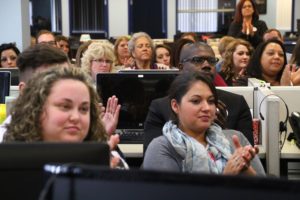 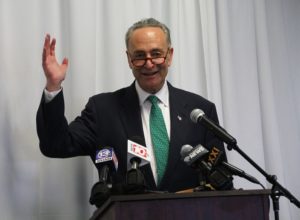 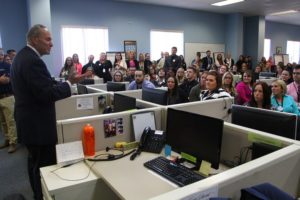 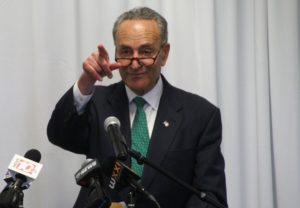