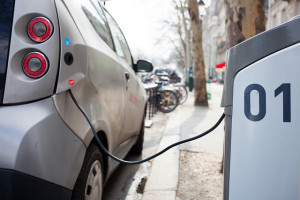 David Keefe, Coordinator with the GRCC, said that a working group including members of RIT, the University of Rochester, Monroe County Planning and Genesee County Planning identified Geneseo as one of the top four towns in the region that could open up a corridor for electric car travel with a public charging station.

“Suppose I live in Brighton and drive a Nissan Leaf, which runs on only electricity, and I want to go to Letchworth,” said Keefe. “Right now, I can’t drive there and home. The car’s range is about 70 or 80 miles on a perfect day. If I have a charge station in Geneseo, I can not only make it to the park, but have lunch and shop here.”

“What’s interesting too is that the College is very much into sustainability,” said Hatheway. “I got orders from the Governor to cut utilities by 20% by 2020, and SUNY Geneseo has done a lot. They have solar panels, they repurpose waste food, we’ve worked a little with them. The College could be very fertile grounds for something like this.”

Keefe said that installing a ‘dumb station’ that cannot communicate with outside networks costs approximately $2,000 to $3,000, and a more sophisticated network station would cost more.

Keefe said that Geneseo was selected alongside Batavia, Victor, and Canandaigua as GRCC’s top four towns of interest within its the region.

According to their website, GRCC is sponsored by the U.S. Department of Energy.