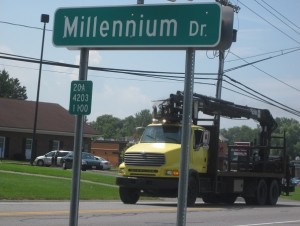 GENESEO – A discarded cigarette is to blame for a mulch fire that damaged a building on Millennium Drive on the afternoon of Aug. 11, just as pouring rain began to fall.

According to Geneseo Fire and Ambulance Chief Andrew Chanler, the cigarette ignited a mulch fire which smoldered and damaged the side of the building, which contains two doctors’ offices.

“The mulch smoldered a great deal, throughout about 8 inched which had been laid down over the years,” said Chanler. “It is fortunate that someone saw the smoke when they did, and that there was only damage to the building’s siding.”

Chanler added that mulch can present a risk for fire, especially in the summer.

“Though the investigation shows that this is clearly a fire caused by discarded smoking material, mulch has a tendency to degrade and self-combust,” said Chanler.

Firefighters with Geneseo Fire and Ambulance extinguished the fire.