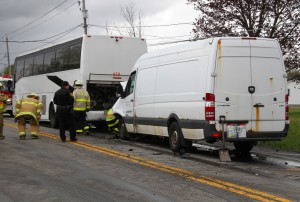 YORK – A van with Aqua Sciences Inc. collided with the back of a tour van on Rte. 63 in Piffard Saturday afternoon.

According to first responders on scene, the bus carrying 49 international tourists stopped in traffic and the van collided with its rear, injuring the driver of the van and sending him to the hospital.

“A car pulled out of a driveway in front of us so I stopped, then felt the van hit,” said Ling, the driver of the bus.

A passenger on the bus with L & L Travel Enterprises said that the passengers come from several nations in Asia, including India, Mumbai, Thailand, China, and Cambodia. She said that no one was seated in the back of the bus, which may have been why no bus passengers were injured.

“We have a capacity of 59 but were only carrying 49,” said Jane with L & L Travel. “That may be why none of our passengers were hurt.”

A Livingston County Hazmat team spread kitty litter to absorb the motor oil which was leaking from the van.

“We see some road sheen here but have our dikes set up to absorb the oil, which seem to be doing a good job,” said Livingston County Emergency Management Director Kevin Niedermaier. “From here, we consult with New York State, as it is their road, to see if it is OK as is or if they’d like to dust the road with sand to give it a little more grit. The contaminated kitty litter we will dispose of in accordance with DEC regulations.”

A chemical tank protruded through the van’s shattered windshield at the scene. According to their website, Aqua Sciences Inc. is a Delaware corporation headquartered in Florida which develops water capture and purifications systems.

Jane said that the group would continue on its tour from Washington D.C. to Niagara Falls. A new bus arrived at about 5:30 p.m. to take all of the passengers onward.

“It will be a memory for the pasengers,” said Jane. “This is not a lucky day at all. Maybe it’s because I saw a crow in D.C. yesterday.” 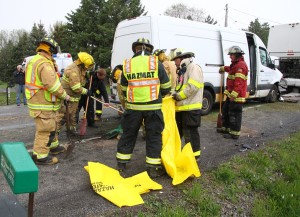 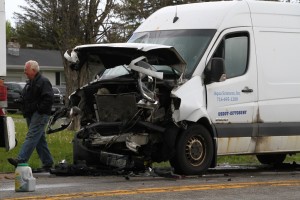 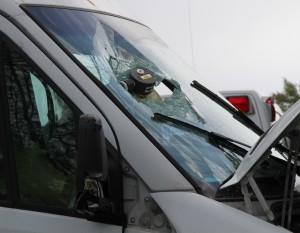 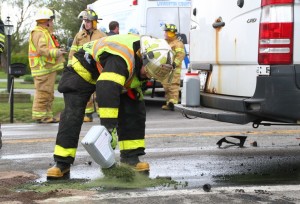 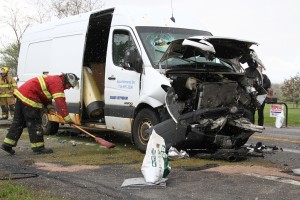