ROCHESTER – The Ten Ugly Men Festival was held at Genesee Valley Park on Saturday, July 21, and the Annual Ten Ugly Men 5km started the day-long festivities.  The overall Men’s winner was Karl Savage of Ardmore, PA which is outside of Philadelphia.  Savage took the victory with a time of 15:34, which was 22 seconds faster than Leo Smith, who finished up with a time of 15:56.  Savage, a graduate of Saint Joseph’s University and a … END_OF_DOCUMENT_TOKEN_TO_BE_REPLACED

Utica – New York’s most popular road race took place on Sunday, July 8 with runners from around the world descending on Utica for the 35th running of the Utica Boilermaker 15km, which is one of the largest 15km races in the United States. The overall men’s winner was Tilahun Regassa, of Ethiopia, who broke away from the rest of the top runners and cruised to a 32-second victory with a time of 43:01.  The women’s winner was Mamitu Daska, of … END_OF_DOCUMENT_TOKEN_TO_BE_REPLACED 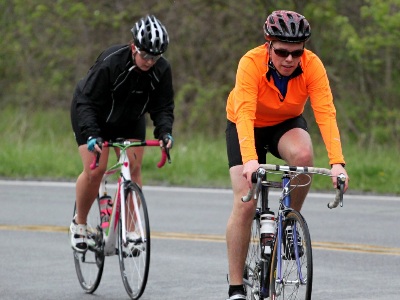 GENESEO — Every Wednesday night, the Livingston Cycling Club holds a social ride beginning at the Cyclepath bike shop in Geneseo. Each of the Wednesday night rides has an A group, B group, and C group option. Each group is led by at least one designated LCC member. Before each ride, group leaders send out an email with the routes so that riders know what is in store for the evening and what time to meet. According to the club's website, … END_OF_DOCUMENT_TOKEN_TO_BE_REPLACED

ROCHESTER – Runners flooded the runway at the Rochester International Airport on Saturday as participants came out to compete in the Airport 5km and to meet 1972 Olympic Gold medalist in the Marathon, Frank Shorter.  According to race co-director Jenna VanThof, the Airport 5km is also a fundraiser for Lifetime Assistance, an organization that helps people with developmental disabilities.  “The Airport 5km is Lifetime Assistance … END_OF_DOCUMENT_TOKEN_TO_BE_REPLACED

NAZARETH – Tim Chichester of Mount Morris edged out Sam MacKenzie of Syracuse at the finish line during last night’s Charlie McMullen Memorial Mile. Chichester finished the mile race with a time of 4:19.1. Chichester, who finished 11th at this year’s Boston Marathon and runner up at the Flower City Half Marathon and Medved Lilac 10km, does not normally run shorter distance races like the mile. “I’m not a miler; I was topped out the whole … END_OF_DOCUMENT_TOKEN_TO_BE_REPLACED MENDON – Runners hit the trails June 2 at Mendon Ponds Park as the Mendon Mauler Trail Race hosted the USA Track & Field Niagara Trail Championships. Kiplangat Tisia of Rochester won the men’s title and Elizabeth Matthews, also of Rochester, took the women’s title. Tisia covered the approximately eight-mile, hilly course in 57:41. “I had a lot of fun out there,” Tisia said. “It is so peaceful running out in the woods you can hear the birds … END_OF_DOCUMENT_TOKEN_TO_BE_REPLACED

HIGHLAND PARK – Over 2,500 runners battled hot conditions at this year’s running of the Medved Lilac 5km and 10km, but the soaring temperature did not phase Kiplangat Tisia or Maegan Krifchin, who won the men’s and women’s titles with dominating performances. Tisia, who first popped onto the Rochester running scene at the Flower City Half Marathon, set the tone early with a 4:22 mile. The competition was top-class and included a handful of … END_OF_DOCUMENT_TOKEN_TO_BE_REPLACED