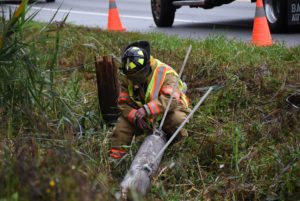 LIMA – A car knocked down a utility pole on Rte. 15A (Rochester Road) Monday afternoon.

According to first responders at the scene, the car was southbound on Rochester Road when it ran off the west shoulder at about 3:46 p.m., rolled into a ditch and struck a utility pole, breaking it and knocking it over.

“There was a single occupant in the vehicle and he was uninjured,” said Lima Volunteer Fire Department Chief Jim Pribanich. “He’s lucky.”

The pole had telephone utilities only, which were undamaged but fell across the road. Firefighters moved them before opening traffic on Rochester Road again.

As of 4:51 p.m., traffic is reduced to a single lane on Rochester Road. 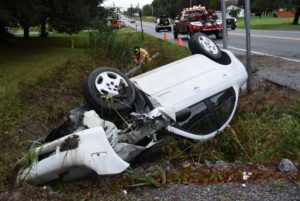 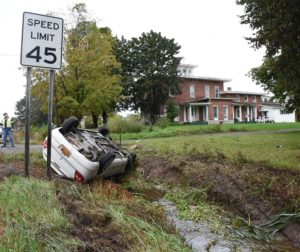