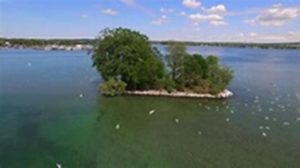 Canandaigua Lake’s smallest island, known for generations as “Squaw Island” has been renamed. The island, which is a state park, was recently renamed Skenoh Island (pronounced SCAN O), meaning in Iroquois, “health” or “peace.” The name change is effective immediately.

The U.S. Geographic Names Committee, the New York Museum, and the New York State Department of Enviromental Conservation recommended and approved the name change, and federal maps will update with the new name, which was suggested by Peter Jemison, site manager of the Ganondagon site in Victor.

“In the Mohawk language,” Jemison explained, “the word ‘squaw’ refers to a woman’s private parts in a negative way. It’s not really appropripate or complimentary.”

Historically, the island formerly known as “Squaw Island” was where the women and children of the Iroquois took refuge from General Sullivan’s army, when his campaign to rid the Indians from the area was in force.  The island was much bigger then, but over the years, erosion has trimmed its size significantly, and now it is most visited by kayakers and seagulls.

The name change has been in progress for about a year and a half, after being suggested by Edward Randoloph, who contacted the Ontario County Board of Supervisors and the Canandaigua City Council to consider changing the name. There was no opposition by any of the agencies involved to changing the name, noting the name was offensive to those who knew what it meant.

The island is the smallest state park in the New York park system, and although many from the area will still undoubtedly refer to the island by the name it has been known as for generations, new maps will call it “Skenoh Island.”