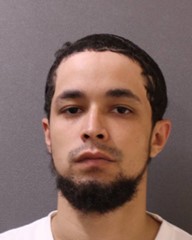 On May 17th, 2022, at approximately 2:45 pm, The City of Canandaigua Police Department, arrested 25-year-old Michael A. Delgado, of Manchester, NY for one count of Attempted Assault in The Second Degree.

It is alleged that on May 17th, 2022 at or about 2:36 PM, Delgado engaged another person in a fight on South Main Street.  During the fight Delgado displayed a knife and lunged it at the other person with intent to cause serious physical injury. Delgado then fled the scene and was apprehended a short distance away on Chapin Street.  No injuries were reported during the incident.

Delgado was subsequently arrested and transported to the Ontario County Jail pending arraignment at CAP Court.