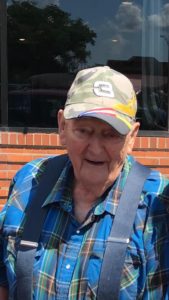 At age 87, Tom passed away peacefully, with his family by his side at his home in Canandaigua on Saturday, January 2, 2021.  Tom was born in Honeoye Falls to the late John and Enid Sargeant.  He was predeceased by his brother; John Sargeant, son-in-law; Charles Deller, his grandson; Richard Britton, and great grandson; Jerry Britton.  Survived by his beloved wife of 69 years; Virginia Sargeant, his daughters; Barbara Deller, Sharon Sargeant, Linda (Armando) Alvarado, and Amber (Jeff) Savage, and his siblings; Bob Sargeant, James (Dorothy) Sargeant, Susanna Wright, and Margaret (Robert) Richardson, his aunt; Margaret Snoddy, along with 11 grandchildren, 18 great grandchildren and several nieces, nephews and friends.

Tom learned at an early age to weld from his father, and he pursed his passion for ornamental works and started Sargeants Ornamental Iron Works in Livonia.

Tom enjoyed spending his free time gardening, being out in the nature, wood working, spending time with his family and talking to others and cracking jokes. He also enjoyed talking about herbs, politics and watching trains. Tom also has a display of Hess trucks that he has collected over the years at the Livonia Public Library.

Tom’s Ornamental work of 45 years can be seen all over, some are as local as a house hold stair railings or the Livonia Public Library to historical places such as Letchworth State Park and a Las Vegas Casino.

Tom was involved in many organizations, and was members of the Dansville Moose Club, NYS Covered Bridge Society and the Noma Society.

A memorial service will be announced at a future date.  A private graveside service will take place at Covered Bridge Evergreen Cemetery in Springwater, NY.  To share a memory or a condolence, please visit:  www.doughertyfuneralhomes.com.