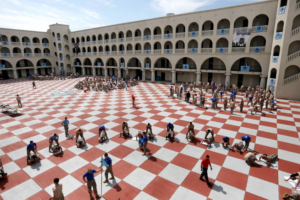 Joshua Roides of Caledonia, New York earned a Physics, BS from The Citadel. Roides graduated during the South Carolina Corps of Cadets virtual commencement ceremony on Saturday, May 9.

Nearly 600 members of the South Carolina Corps of Cadets accepted diplomas during The Citadel’s virtual commencement. In addition to graduating, about 30% of the class accepted commissions as U.S. military officers in all branches of service.

The Citadel Class of 2020 was celebrated for their achievements during two virtual commencement ceremonies. Both can be viewed on the college’s Facebook page and on a special commencement website.

Part of the virtual commencement celebrations included creating a webpage for each graduate, where they and their loved ones can share messages. In total, more than 6,000 messages were left on the commencement profile pages. To view an example of a graduate page, click here to see the profile for Richard “Ben” Snyder, the 2019-20 Regimental Commander.

By the numbers, the ceremony included:

The Citadel, with its iconic campus located in Charleston, South Carolina, offers a classic military college education for young men and women focused on leadership excellence and academic distinction. The approximately 2,400 members of the S.C. Corps of Cadets are not required to serve in the military, but about one-third of each class earn commissions to become officers in every branch of U.S. military service. Citadel alumni have served the nation, their states and their communities as principled leaders since 1842. The Citadel Graduate College, founded more than 50 years ago, offers 26 graduate degree programs, 25 graduate certificate programs and 10 evening undergraduate programs in the evening or online. Consecutively named Best Public College in the South by U.S. News & World Report for nine years and No. 1 Best Public College for Veterans in the South for two years. Learn more about Our Mighty Citadel here.