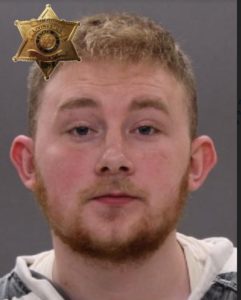 Sheriff Thomas J. Dougherty reports the arrest of a Caledonia NY resident on felony charges following an  investigation by the Sheriff’s Office into multiple stolen vehicles from several towns.

On June 15, 2021 at about 2:00 pm, Sheriff’s Deputies responded to a business on Flint Hill Road in the Town of  Caledonia for the report of a vehicle that was stolen from the location. During the investigation it was determined that the  vehicle had been located by the Ellicottville Police Department in Cattaraugus County.

On July 11, 2021 at about 06:15 am, Sheriff’s Deputies responded to Genesee Street in the Town of York for the report of  a motor vehicle crash. Upon arrival Deputies located a vehicle in the ditch, and no occupants at the scene. Through  investigation it was determined that the vehicle was reported stolen from a business in the City of Batavia, Genesee  County.

On July 12, 2021 at about 08:50 am, Sheriff’s Deputies were dispatched to a residence on Retsof Avenue in the Town of  York for the report of another stolen vehicle. Deputies were advised by the vehicle owner that it was believed the vehicle  was stolen the day before. The vehicle was later located in the City of Batavia.

On July 21, 2021 at about 1:45 pm Sheriff’s Deputies were dispatched to Riverside Drive in the Town of Geneseo for the  report of a recovered stolen vehicle. Upon arrival Deputies discovered that a vehicle reported stolen from the Town of  Java in Wyoming County had been left at the location.

Sheriff’s Investigators, working with multiple agencies regarding the pattern of stolen vehicles, were able to identify  suspects.

Sumeriski was turned over to Central Booking Deputies at the Livingston County Jail for processing and pre-arraignment  detention. The offenses did qualify for pre-arraignment detention under the NYS Justice Reform Act; however, a Judge  may not set bail under the law and the individual must be released.

the law providing Sumeriski a future court date, and Deputies did then release Sumeriski from custody on the felony  charges.

The investigation is ongoing and additional arrests are possible.