CALEDONIA – Cold residents can go to J W Jones Hall 366 Leicester St. to warm up while they wait for power to be restored to their homes.

Livingston County Sheriff Thomas Dougherty issued a travel advisory for York and Caledonia and advised the public of the warming station in a press release.

“Livingston County Sheriff Thomas Dougherty has issued a travel advisory for No Unnecessary Travel for portions of Livingston County including all of the Town of Caledonia and all of the Town of York until further notice,” said Dougherty in the release. “At this point we are working several incidents involving trees, poles and wires down blocking roadways. Additionally the Town of Caledonia has opened a warming station at J W Jones Hall 366 Leicester St Caledonia for anyone who does not have power. We ask that people who do not have to be on the roads stay off of them while crews work to clean up storm damage. This advisory remains in effect until further notice.”

A tractor trailer blew over on Simpson Road in York . A tree fell onto a house on Brown Road in Caledonia, knocking down wires. Multiple utility poles came down in the area of Cowan and Stewart Roads in York.

The truck in York’s rollover was hauling an empty trailer. Emergency crews directed traffic as more first responders arrived to deal with fuel that was reportedly leaking into the roadside. No one was injured.

Fire departments across the county handled multiple calls for trees falling on houses or across roads. No homes are reported to be seriously damaged so far.

One man is reported to have been knocked unconscious by a falling tree on Main Street in York. As of 5:51 p.m. Wednesday, first responders were rendering aid to that person.

One tree was reported to have fallen on an electrical wire and burst into flames in Nunda. As of 6:58 p.m. Wednesday, firefighters were responding to that scene. 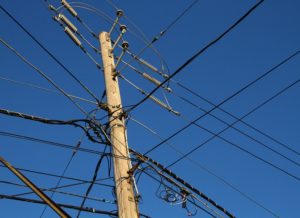