LIVINGSTON COUNTY – Trial begins Monday for the man accused of murdering his girlfriend’s roomate and burning her body in Caledonia.

Aykut Ozkaynak, 36, will stand trial for Murder in the Second Degree and Tampering with Physical Evidence, both of which are felonies.

Ozkaynak was arrested with Mary Neverett for the death and burning of Neverett’s roomate, Patrice Miller, 64. Neverett already pled guilty to felony Manslaughter in the First Degree and agreed to serve 20 years in prison.

The trial will begin with jury selection. Evidence is not expected to be heard on the first day of trial. 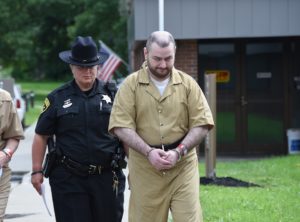 Ozkaynak returning to jail from a past court appearance. (File photo/Conrad Baker)