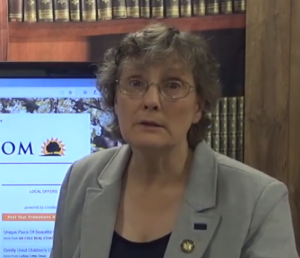 Assemblywoman Marjorie Byrnes (R,C-Caledonia) joined Senate Minority Leader Robert Ortt, Assembly Minority Leader Will Barclay, members of both Conferences, and members of the law enforcement community at a press conference in the state Capitol today to highlight the need for public safety measures and additional resources for police. The group is calling for legislation to better protect the citizens of New York from the rising scourge of crime that has been plaguing the state since Cuomo’s bail reforms were enacted.

“People don’t feel safe. Whether it’s a constituent who is concerned about getting carjacked or a small business owner having to make security investments, New Yorkers from Buffalo to Long Island don’t feel safe at work or at home. Sadly, the numbers back up these fears,” said Byrnes, who had a career in criminal justice before entering the state Assembly. “We are here today to tell people, we hear you and we are doing something about it. We are working with law enforcement to try to provide them with the tools they need, but leaders in Albany must listen too. Gov. Hochul and legislative leaders need to join us. There’s no time like the present to do so.”

Not only has there been a 46.7 percent increase in murders statewide from 2019 to 2020, but according to the New York State Coalition Against Domestic Violence, demand for New York’s domestic violence services is the highest in the nation. This is especially concerning to Byrnes with the current economic climate. Domestic violence often increases under economic pressure which, sadly, can trap families from being able to escape.

Byrnes and her colleagues are hoping to see an increase in funding for law enforcement in this year’s state budget, along with legislative policies that will increase public safety. A full repeal of the bail reforms is on the wish list, but much to Byrnes’ disappointment, Gov. Hochul made no mention of it in her State of the State address.

“Repealing bail reform would have sent a clear and direct message that this criminal spree is over. It would have sent the message that this interim governor is here for good, willing to make tough choices, and really listen to the people, instead of the same old special interests,” said Byrnes. “It’s not too late for Gov. Hochul to do the right thing for the people and put politics aside. But for public safety’s sake, she has to stop listening to those downstate special interests that are controlling the agenda and the campaign coffers.”