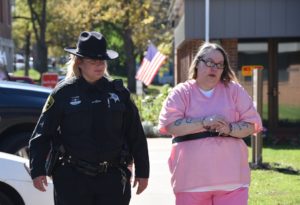 LIVINGSTON COUNTY – The woman who pled guilty to being involved in the murder and burning of Patrice Miller cried as her attorney read an emotional statement to the judge, whom she knew was about to issue a significant prison sentence.

Mary Neverett, 44, had her attorney, Assistant Public Defender Lindsay Quintilone, read a prepared statement to Judge Dennis Cohen. The Judge was about to issue a determinate sentence somewhere between 18 and 20 years for felony Manslaughter in the First Degree.

“If I could give my life for Patrice’s life, I would,” said Neverett’s statement. “I have cooperated with the District Attorney to the best of my ability.

Quintilone herself asked the court to take into consideration Neverett’s hard life, persistent drug abuse and her agreeing to testify compellingly at the trial for her codefendant, Aykut ‘Ike’ Ozkaynak, whom the jury convicted for murder based largely upon her testimony. Neverett appeared in court in a pink ‘trusty’ inmate jumpsuit.

“Ms. Neverett has had a very difficult life,” said Quintilone. “Were it not for the drugs that she was using in and around the time of these crimes, she never would have been involved in them. […] We would ask that you sentence her to 18 years and five years of post-release supervision. I don’t think anyone could have asked her for more than what she did at trial.”

When asked if she had any further comment, Neverett barely choked out a ‘no’ through her tears. Members of the New York State Police, who investigated the case and arrested both Ozkaynak and Neverett, attended the sentencing alongside numerous members of Miller’s family. Cohen said that family members had sent letters regarding Neverett and the sentence.

Cohen said that Neverett is entitled to some consideration and ultimately sentenced her to 19 years in prison and five years of post-release supervision.

“Obviously this case is beyond disturbing,” said Cohen. “There is no question that she’s had a difficult life. Most recently she was involved with a person who is now convicted of murder, who got her involved in the hard drugs she was doing at the time of this crime. Based on her life before this and my evaluation of this, she never would have been involved in this if it weren’t for Mr. Ozkaynak. Her testimony was convincing and compelling. The jury believed it, as I did. I had the unique opportunity to speak to several of the jurors after the trial and they relied on her testimony to convict Mr. Ozkaynak. I don’t know if they would have convicted him otherwise. You had a burned body and a lot of issues in this case that made it difficult to prove murder. […] She’s shown great remorse. She’s indicated that just about more than any other defendant I’ve had. She’s entitled to some consideration on this and I’m going to give it to her.”

District Attorney Greg McCaffrey said that Miller’s family accepts the sentence, but nothing will bring their family member back.

“While Ms. Neverett may have had a difficult life, she still has a life,” said McCaffrey. “Ms. Miller’s daughter doesn’t have a mom anymore, and her grandkids still don’t have a grandma anymore. Ms. Miller still participated in a killing that she deserves to go to prison for.”

At trial in October, Neverett testified in graphic detail how she and Ozkaynak ‘got high on cocaine’ and smothered Miller, 64, who was her roomate, then put her body into a laundry tote and drive her to Lacey Road in Caledonia, where they doused Miller in lighter fluid and burned her as much as they could.

Neverett said she and Ozkaynak were stealing from Miller for some time before deciding to kill her ‘because she was so miserable and in pain.’ You can read our complete coverage of Neverett’s testimony here. 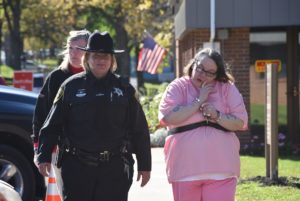