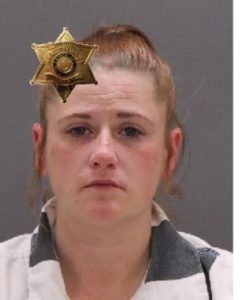 On May 18, 2022 at approximately 10:50 am, Sheriff’s Deputies responded to a residence on East  Street in the Village of Nunda for the report of a burglary. Upon arrival, Deputies learned that an  assortment of jewelry and personal items had been stolen from the residence.

The Sheriff’s Office Criminal Investigations Division was able to develop a suspect using video  surveillance from within the residence. The suspect was identified as 34-year-old Caren M. Howie.

Howie was arrested and charged with felony Burglary in the Second Degree and felony Grand  Larceny in the Fourth Degree.

Howie was transported and turned over to Central Booking Deputies at the Livingston County Jail for  processing and pre-arraignment detention. The District Attorney’s Office was contacted in regards to  bail due to the felony level charges. It was recommended that bail could be set on Howie under the  NYS Justice Reform due to the Burglary 2 charge being a qualifying offense and requested bail at  $5,000 cash/credit or $10,000 secured bond.

Howie was later arraigned at the Livingston County Centralized Arraignment Part (LC-CAP) at the  Livingston County Jail before Town of Lima Justice Harris. The Judge declined to follow the  recommendation from the District Attorney’s Office and released Howie on her own recognizance.

The investigation was handled by Sheriff’s Investigator Connor Sanford of the Criminal Investigations  Division, Sergeant Chad Van Auken of the Forensic Identification Unit and Deputy Morganne  Harrington of the Patrol Division.