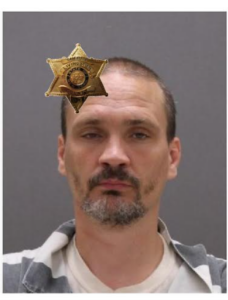 Sheriff Thomas J. Dougherty reports the arrest of an Ontario County resident on felony and misdemeanor charges following an investigation by the Sheriff’s Office.

On September 15th, 2022, at approximately 2:40 a.m., Sheriff’s Deputies responded to a business on Leroy Caledonia Road in the Town of Caledonia to report a burglar alarm. Arriving Deputies began checking the company and located a male inside a fenced-in area who was hiding under a vehicle. Deputies took the male into custody and identified him as 40-year-old Shawn A. Ganoe of Canandaigua, NY. At that time, Deputies found him possessing a crowbar and other tools commonly used to commit burglaries.

It alleged through the investigation that Ganoe cut a fence at the business and entered a secured area. It is further alleged that Ganoe attempted to enter a building at the company by forcing open more than one door.

Sheriff’s Investigator Matthew Orman arrested and charged Ganoe with felony Attempted Burglary in the Third  Degree, Criminal Mischief in the Fourth Degree, Possession of Burglar’s Tools, and Criminal Trespass in the  Third Degree.

Ganoe was transported and turned over to Central Booking Deputies at the Livingston County Jail for arrest processing and pre-arraignment detention. The District Attorney’s Office was contacted regarding bail due to the felony charges. It was recommended that Ganoe be held without the possibility of bail due to him having four prior felony convictions.

The investigation was handled by members of the Patrol Division, Criminal Investigations Division, and the  Forensic Identification Unit (FIU) under the command leadership of Sergeant Joseph Zambito.

The investigation is ongoing.