LIVINGSTON COUNTY — Don’t be disillusioned by his last name. Sean Bunny, a former Army Iraq War Veteran and US Army Ranger, isn’t going to be a soft opponent in his run for Congress.

The Western New York native most recently served as an Erie County Assistant District Attorney, and will be vying for the seat of Chris Collins in New York’s 27th District, which includes parts of Erie, Niagara, Monroe, Ontario and Livingston counties. First, Bunny will have to make it through the Democratic primary where he will face at least two other declared candidates, Tom Casey and Nicholas Stankevich.

“Congressman Collins isn’t serving the interest of this district,” said Bunny who lives in East Amherst with his wife and two kids. “This is a diverse district and you need to serve everyone.”

Bunny said that he is running as part of his lifelong journey of service to the community that started with being an officer in the United States Army and continues today.

After graduating from Syracuse University, Bunny served as an executive officer in the 10th Mountain Division, earned his Ranger Tab, completed a tour in Iraq and then went on to get his law degree from University of Buffalo where he then joined the Erie County District Attorney’s Office.

“This is the fun part of the job,” said Judith Hunter, Livingston County Democrat Chair, while introducing Bunny to members of the community. “It’s good to be able to help candidates. I’m happy to help facilitate the way for all Democrate candidates as they run for office.”

“I served in the military with Republicans, Democrats and independents and we got the job done,” said Bunny. “It’s not about being a Republican or Democrat.” 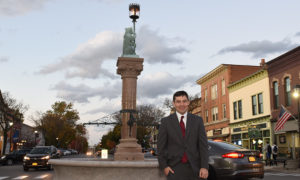