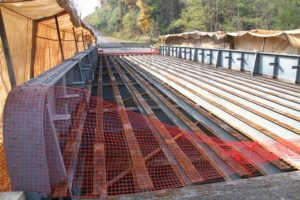 CORRECTION: An earlier version of this story mistakenly said that the cost of this project was being quintupled by the newly discovered bug damage.

Donald Higgins, Livingston County’s Superintendent of Highways, said that the early estimate for replacing the 20-year-old, 100-foot bridge was $442,000, but now that he, the Project Inspector, Mount Morris Highway Department, NYS Department of Transportation, and CP Ward, the contractor, have analyzed the moisture and insect damage, the cost will have to be $643,000.

“It’s a stick-built deck, and when I say stick-built I mean that we purchased pressure-treated lumber and set two-by-fours on edge 20 years ago,” said Higgins. “Unbeknownst to us, the collection of moisture in the first four feet on each end that are sitting on top of concrete made good conditions for insects which deteriorated the wood. […] The time to replace it is now, while the bridge is exposed and there is still enough money left in the government grant funding to keep the County’s local share the same.”

The 45 percent increase in cost will go towards additional preventative maintenance work by CP Ward. The bridge is just one of four in the county that will be maintained as part of the $1.145 million project.

Cross-governmental funding from the Federal Highway Administration and NYS Marchiselli Program is covering 94.5 percent of the project’s total cost, with Livingston County responsible for 5.5 percent, as per the original project agreement. Livingston County’s bill for the Scipio Road project will now be $11,000. Higgins presented the change order to the County Public Services Committee Wednesday morning. The Livingston County Board of Supervisors will vote to pass or reject the change order on Nov. 9.

“Livingston County’s share of the project will still be 5.5 percent,” said County Administrator Ian Coyle. “There is still intergovernmental funding available to cover the project so that our local share will not go up. County Highway really didn’t think that they would have to replace the wood structure.”

Higgins said that the silver lining here is that the new bridge will be even stronger and more long-lived than if the project had gone as planned, and that it would cost the County even more to tear up the bridge and do this work in a few years instead of now. The new deck will be a glu-laminated timber bridge system.

“It’s a win-win this way,” said Higgins. “We’re fortunate that the contractor, CP Ward, noticed that there was something wrong while working and brought it to our attention. This way, we can build a structure that will last for the next 50 to 70 years.”

The bridge surface is already removed, and traffic is closed on Scipio Road between Barron Road and Wildcat Road. 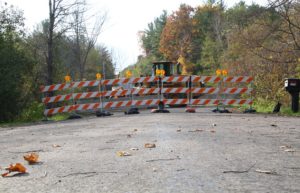 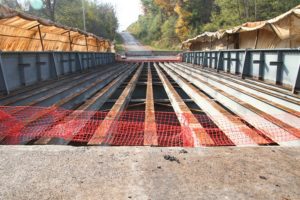