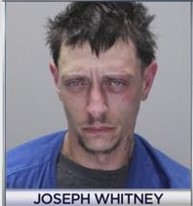 Two people were arrested by Ontario County deputies following a Saturday, October 9 burglary call which ended in a police chase through several towns, and ended in a crash in the Railside market in Victor.

Melinda Kress, 57, and Joseph Whitney,41, both of Rochester, were arrested, and face several charges including criminal possession of weapons and burglary charges.  Whitney is a suspect in several other Ontario County burglaries where guns have been stolen.

A caller had called the Ontario County deputies to a Johnson Hill Rd address in Bristol, on a burglary-in-progess.  When the deputy arrived, a red pickup truck matching the description of the burglars’ truck fled, with the deputy in pursuit. The chase led to East Bloomfield where Whitney, the driver, tried to take a shortcut through a soybean field, where he did significant damage to the field, as well as blowing out a tire, which ultimately limited his ability to control the vehicle.

Whitney eventually made it to Rt. 96 in Victor, driving on three wheels with smoke pouring from the vehicle.  He was driving down the middle of busy Rt. 96 in Victor, when he lost control of the truck and crashed it in the Railside Market parking lot. Both he and Kress were taken into custody by the deputies. At the market, deputies searched the truck and found stolen long guns, pistols, and tools. Both suspects were taken to the Ontario County Jail.

A K-9 officer who was also involved in the chase was injured, although the dog was released and is home after being seen by a veterinarian.