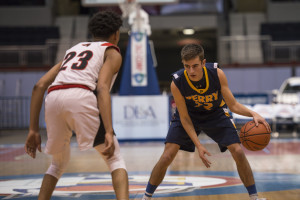 NYLON — Friday evening closed the book on the season for the Perry Yellow Jackets as they fell to the Northstar Christian Knights 74-55 in the Section V Class C2 basketball championship. The game took place at Blue Cross Arena in downtown Rochester.

The Yellow Jackets were sluggish to open the game, committing 10 of their 13 total turnovers in the first half. They found themselves down 30-12 early in the second quarter before finishing the half on a tremendous 19-3 run to stay in the game. That run included a few highlight plays, such as a behind-the-back pass from junior Owen Spencer to sophomore Austin Croll on the fastbreak leading to an and-one that cut the lead to single digits late in the half.

But in the second half, the Knights took the Yellow Jackets’ momentum and swung it the other way, outscoring their opponents 41-24 in the final two quarters to finish with a commanding win. Freshman Miles Brown and sophomore Trey Roberts led the way for the winning team, combining for 36 points and 12 rebounds.

“We have no fear,” said Roberts, who finished with 14 on 3-3 shooting from deep. “If you have fear, you won’t be able to come out and do the things that you’ve worked on your entire life. We know we’ve just gotta play our games and everything will come.”

But after pushing themselves back into the game at the end of the first half, Perry’s offense struggled for the rest of the night. The team shot just 22.6 percent from the field in the entire second half. Northstar Christian Academy head coach JJ Garwood said that sticking with the original defensive gameplan in the second half paid off for his team.

“As a coaching staff we decided we were gonna stick with a 3-2 zone with Nate [Wade] in there as a rim protector, and it paid off and he did a great job clogging up the middle and allowing our guards to pressure their guards”, he said.

Perry ends their season with a 17-7 record. Northstar Christian Academy, who are located in Rochester, have still only conceded one loss all season long. 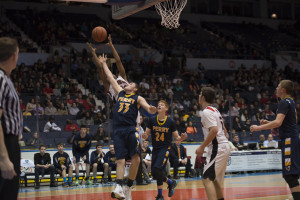