CONESUS – Photos, rumors and online articles on America’s most successful canine are rippling through Conesus Lake towns as a daring predator  ventured out on the open ice in broad daylight for two days.

Though not necessarily dusk or night hunters like raccoons, opossums or skunks, coyotes are notoriously cautious of humans and seeing one so frequently on one of the most exposed patches of Livingston County is unusual. Lake residents delighted in the thrill of the ‘chase,’ posting photos and updates when they spot the animal out and about.

“Coyote is still out there,” posted Facebook user Michelle Underwood on Feb. 13. “He (Or she) slept on the ice last night closer to the east side across from Cottonwood Point. Now just wandering the ice in the same general location. Anyone over on the east side able to get a better view?”

As always, some people express concern that the animal might be diseased, or inherently dangerous. While being out on the ice in daylight hours is not unheard of or necessarily a red flag for a dangerous disease like rabies, coyotes do often eat cats and small dogs.

Facebook users say that they did contact the Livingston County Sheriff’s Office and Animal Control about the coyote. Observers were able to confirm that it is not the dog reported missing as of Jan. 20.

Still, others say that the coyote is just doing what coyotes do, searching for food in creative places.

“Yes it is natural for Coyotes to search everywhere for food. They are a wild animal and lakes, streams and ponds are all possible food sources. Fish and other aquatic animals are a very viable food source. Leave it alone let it be what it is. Until it becomes a serious issue it has as much right to doing what it does as all of us.”

Users posted links to some online articles with basic tips and information for minimizing conflicts with coyotes, like this one on how to keep pets safe in coyote country. 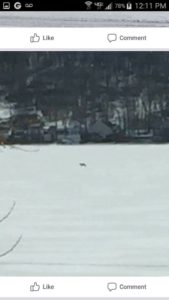