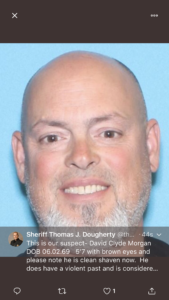 By Joe Shepard and Robert A. DeLena

Sheriff Tom Dougherty along with the Geneseo Police Department and U.S. Marshall’s office have confirmed the skeletal remains of a body in Geneseo.

At 1:30 P.M. On February 23, the Livingston County Sheriff’s Office received a call on what was believed to be human remains.

“We received a call from a hunter who was out looking for deer antlers, who thought they found human remains,” said Sheriff Dougherty.

After processing the scene for several hours, deputies did confirm a decomposed body.

Speculation is that the remains are that of fugitive David Clyde Morgan, who in 2018 shot at a Geneseo police officer.  The officer shot back and Mr. Morgan was able to flee the scene.

Sheriff Dougherty stressed that “there was no concern for public safety.”  He also stated that the body will be examined through dental records as well as DNA.

“Once we have a 100 percent identity, we will confirm that.”

The Sheriff’s office has said that dental records could take a few days, while DNA could take weeks.

The body was found in the general area near the traffic stop where the incident took place in 2018.

An interview with the comments of both the Sheriff and the U.S. Marshall can be found on our YouTube channel.   Simply go to YouTube and in their search, engine type the words “Genesee Sun. “It should be among the top videos on our channel.  Or simply go to this link.