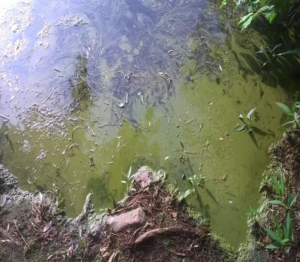 In three of the 11 Finger Lakes the blue-green algae blooms are beginning to appear as we head to Mid-August heat.  The lakes of Conesus,  Honeoye and Hemlock –the  three most  western Finger Lakes have had such sightings.

Blue-green algae, a naturally occurring form of photosynthetic bacteria, can proliferate wildly, or bloom, under the right conditions. Some forms of the organism release toxins that can be harmful to the health of people, pets and other animals that drink or come in contact with the water.

The NYS Department of Health notes that this year water quality monitors are reporting an unusually high level of toxicity in some of the blooms.

“Specifically, 10 blooms have been observed with toxin levels that exceed all safe guidance values for water set by the Environmental Protection Agency and the New York State Department of Health,” A

When there are blooms present, the health department says that private water supplies taken directly from the lake should not be used for bathing, showering or washing dishes, even if the water is treated.  Nor should one eat fish from waters with the toxins.

However, public water supplies from the lake are treated, disinfected and monitored..

The nonprofit Finger Lakes Land Trust says that “In recent years, all 11 Finger Lakes have been struck by outbreaks of cyanobacteria, commonly called toxic algae or harmful algal blooms (HABs).  More than one million people depend on the lakes for their drinking water in Upstate New York.”