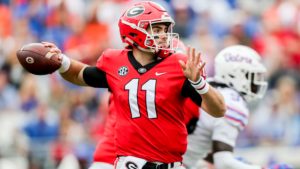 Be careful what you text.  The fifth-round quarterback is facing criticism for a  text message he made in March, 2019 which appeared on Twitter this past week.  .

Apparently, the former Georgia quarterback made what he thought was a joke regarding gun ownership. Stating he wished gun sales were only available to “elite white people” is causing a media blitz that could sack the young player before starting his career.

Since then the former Bulldog has apologized both in public and to his team stating he was wrong for texting that statement and that he is not a racist.

“Jake seemed very sincere in his apology… I think for our team, we have a strong culture on our team. Those guys are going to be able to sift through what is real and what’s not real. We haven’t been around Jake. We haven’t had a chance to spend much time with him because of the virtual offseason that we’re in. He’s a teammate. Those guys, I think over time, he’ll gain their trust”