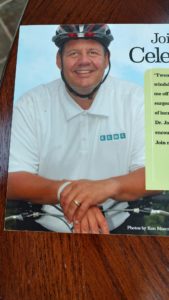 He’s a public figure that’s “done it all” professionally. Now Mike is sharing his private struggle with the hopes of encouraging others that are hurting psychologically.

Mike lives with depression and mental health issues ever since suffering a traumatic brain injury from a bicycle accident that happened 30-years ago this September.  He was hit by a drunk driver. Spent 17-hours in surgery. Doctors did not think he would live.

He survived the horrific crash.  At the time of the accident, Billoni was breaking records with the Bisons. The team had just completed a record fifth of sixth straight seasons selling more than one million tickets to the downtown ballpark that opened as Pilot Field in 1988.

“Four days later, I woke up in excruciating pain.  Tubes were inserted all over.  A cast was on my fractured left ankle, an air cast on my right leg, a cast on a broken wrist, and my right shoulder was fractured.  I saw a huge scar on my stomach where they removed my spleen to stop the bleeding.  My face was a mess, a black eye, stitches on my forehead.   My helmet was lodged in my skull.  My parents and a doctor said if I was not wearing a helmet I would either be dead or a paraplegic,” said Billoni.

Mike recovered physically.  Unfortunately, Billoni’s mental health issues were just beginning. He believes a deep, dark depression that struck him was directly related to the traumatic brain injury caused by the crash.  He attempted suicide at the height of his depression.

“I was standing at the side of the Thruway. My plan was to jump in front of the next semi.  Right then, a friend drove by and stopped, thinking I had car trouble.  That intervention, I believe, was divine. I looked up and said ‘now what?’ God told me to ‘use the tools I gave you to end the stigma associated with mental illness and help the less fortunate,’” said Billoni.

In addition to walking in the 2022 “Buffalo Out of Darkness Walk” to strengthen suicide prevention efforts, Billoni also speaks to groups all over New York about the importance of reaching out for help if a single thought of self-harm creeps in. He was recently elected to the Board of Directors for the organization Recovery Options Made Easy (ROME).

“I’m sharing my story to let people from all walks of life know they are not alone, their struggle is nothing to be ashamed of, and help is available,” said Billoni, who noted that social media can be an avenue for people to use, a tool that did not exist three decades ago.

“Facebook provides great resources for help. Crisis Services of Buffalo is active on Facebook, so is the American Foundation for Suicide Prevention. I’ll hop on social media for positive affirmations that groups post. Those needing help might not be comfortable calling someone at first. That is why social media is so important. People can send a message to an agency right away if they’re hesitant to call,” added Billoni.

With September being Suicide Prevention Month, Billoni encourages all who are struggling to feel empowered by asking for help. Resources are even easier to obtain by calling a specially designated three digit phone number: 998.

“You are not alone. You are loved. You are worthy. You are valuable, and help is all around you if you need it,” concluded Billoni.