According to the National Weather Service, southerly winds will bring warm air into Western New York through Friday. This extended period of above freezing temperatures will result in extensive snow melt. A period of rainfall will accompany this period of warmer weather, with the combination of the two resulting in significant rises on area rivers and creeks.

Rainfall during the watch is expected to average between half an inch and an inch.

The primary risk for flooding will be due to ice jams. Area creeks and rivers have thick ice in place. Rapid rises in water level can break up this ice, which can then become jammed where there are constrictions in the river or creek channel, such as curves or other restrictions. People living in areas that are prone to ice jam flooding should take the time in advance to prepare for the potential for flooding this Thursday and Friday.

There is also a risk of general river and creek flooding. This will primarily depend on where the heaviest rainfall occurs and may be localized to a few basins in the watch area. Even so, there is a significant risk of localized rainfall totals of greater than an inch which may result in river and creek flooding. The combination of snow melt and rain also may cause basements to flood. 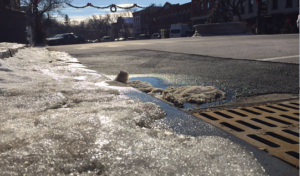