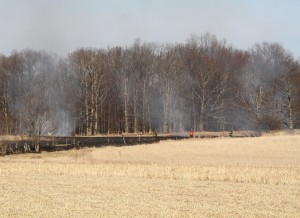 NYLON – The New York State Department of Environmental Conservation (DEC) reminds New Yorkers that with warming temperatures and dry conditions, residential brush burning in towns with less than 20,000 residents is prohibited from March 16 through May 14.

According to a press release from the DEC, the lack of snow cover over much of the state and unseasonably warm temperatures means that conditions are ripe for wildfire in the coming weeks.

“While many people may associate wildfires with the western United States, the early start of spring weather, dry conditions and lack of snow pack are increasing the risk for wildfires in New York,” said Acting DEC Commissioner Basil Seggos. “New York prohibits residential burning during the high-risk fire season to reduce wildfires and protect people, property and natural resources. Since being enacted in 2009, the ban has been extremely effective in reducing the number of wildfires, and we need all residents to put safety first and follow the brush burning ban.”

The DEC says that open burning of debris is the largest single cause of spring wildfires in the state. When temperatures are warmer and the past fall’s debris and leaves dry out, wildfires can start and spread easily and be further fueled by winds and a lack of green vegetation.

New York enacted strict restrictions on open burning in 2009 to help prevent wildfires and reduce emissions. The regulations allow residential brush fires in towns during most of the year, but prohibit such burning in spring when most wildfires occur. In the five-year period since the ban was enacted, the average number of spring fires per year decreased by 33.4 percent, from 3,297 in 2009 to 1,649 to 2015.

The DEC also urges citizens to employ alternatives to burning brush, like chipping wood and downed branches for use as mulch and composting yard waste, leaves and plant clippings for use in gardens.

Campfires using charcoal or untreated wood are allowed, but people should never leave fires unattended and must completely extinguish them before leaving the area. Burning garbage or leaves is prohibited year-round.

Violators of the open burning state regulation are subject to both criminal and civil enforcement actions, with a minimum fine of $500 for a first offense. To report environmental law violations call 1-800-TIPP DEC (1-800-847-7332), or report online on DEC’s website. 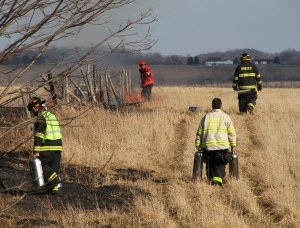