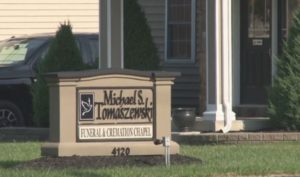 Michael Tomaszewski, 48, a Batavia funeral director, has now been charged with the additional charge of holding a body for an unreasonable amount of time, in his funeral home garage, even though he had a certificate saying the body had been buried.  Tomaszewski had told the family of the dead person decomposing in the garage of the funeral home that the remains had been buried in a specific plot in a specific cemetery, but cemetery records showed that was not the case.

Tomaszewski had filed a death certificate corroborating the claim the body was buried, and as a result, is being charged with violation of Public Health Law 4200 which calls for a body to be buried within a reasonable amount of time. (He had held it for 264 days.) ) He was also charged with filing a false instrument.

Tomaszewki was charged a few months ago with 15 counts of Grand Larceny for taking money for future funerals, and not depositing the money in a special account as required by law. Since then, more investigation revealed there are 93 families who gave Tomaszewski money for headstones and cemetery lots they believed they had purchased. A class action suit is underway.

The funeral director has been issued appearance tickets, and the case will be heard on a later date. The deceased person had since been buried,