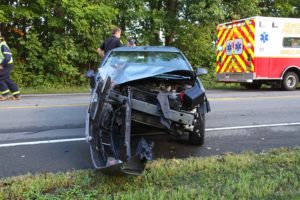 GENESEO – Police chased down and arrested a young man after his vehicle allegedly rear-ended another and pushed it off of Avon Geneseo Road, injuring two people inside.

Neighbors said that they heard the accident at approximately 7:50 a.m. and then saw a driver take off on foot. Police are currently investigating at the scene.

“I was sitting at home turning the TV on and reading the paper when I hear this car come screaming up from Avon,” said Richard Longfellow, who lives within sight of the scene. “You know when a police car gets going really fast and you can hear it a mile away? Well this guy was going fast. I heard screeching brakes and a crash. When I get there, the guy comes out of his car with no shoes and no pants on, just a shirt and boxers, and runs toward Geneseo.”

“He got to the caution light before I lost sight of him,” said Longfellow. “I called 911 and gave them a description. Black hair, no shoes, just in shorts. I didn’t even see the other car. When the firefighters came they kept saying ‘there’s a car over here, there’s a car over here,’ but I hadn’t seen it. The husband and wife were inside but they only have her out.”

The other car was on its side against the steel fence along Avon Geneseo Road. Firefighters cut the fence and several tree branches to free a female passenger.

Reporters saw the barefoot male struggling with police and shouting obscenities at the scene before being transported to the hospital in an ambulance, accompanied by police. Police say that he punched a Sheriff’s Deputy in the face.

Geneseo Firefighters responded to the scene alongside ambulances with Geneseo, Avon and Livingston County EMS. 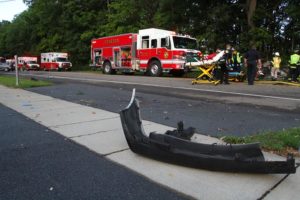 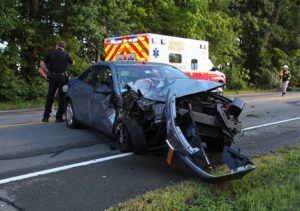 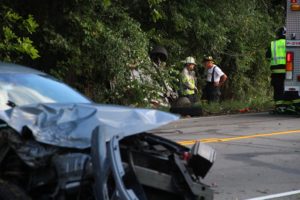 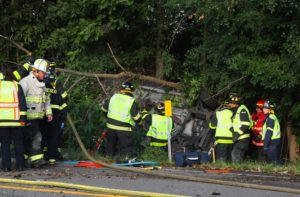