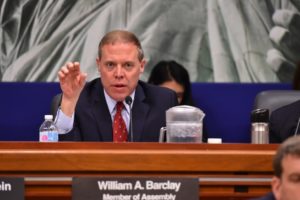 Assemblyman Minority Leader said the following about the end of the 2021 legislative session.
“In the early hours while most New Yorkers slept, the Legislature wrapped up the 2021 Legislative Session. While there were a few notable pieces of legislation passed that will help everyday New Yorkers recover from COVID-19’s economic devastation, far too little was done to protect and strengthen their quality of life in the long-term.
Genesee Local Offers

A federal bailout in the amount of $12.7 billion brought New York off the brink of financial disaster. But that money is only a temporary fix. This session will be remembered as one that raised taxes too much, spent far too much and left New York state unsafe and unaffordable.

Recent new laws have upended our criminal justice system and fueled an unprecedented spike in violent crime in communities across New York. Rather than restoring order, Albany Democrats have been systematically dismantling the rule of law piece by piece. The Assembly Minority Conference is committed to push even harder on behalf of innocent victims and protect the interests of those who protect us.

Additionally, New York continues to operate under a state of emergency despite reaching new lows in COVID positivity rates and hospitalizations. As we head into the summer months, we will work diligently to restore the Legislature to its rightful place as a co-equal branch of New York state government. Enough is enough – the state of emergency must come to an end and we must restore order to fully advance our recovery. The time is now.

Even though we’ve reached the end of the session calendar, I, along with my colleagues, am committed to continuing to do the people’s work each day. New York has moved too far in the wrong direction, and we must ensure we get back on track before more residents pack their bags and head for the exits.”