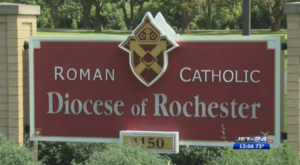 Abuse Survivors Must File Their Bankruptcy Claim By August 13, 2020, Or They Will Be Forever Barred from Taking Legal Action Against the Diocese

As the Diocese of Rochester continues bankruptcy proceedings, nationally renowned child sex abuse attorneys are urging sexual abuse survivors to file claims before August 13, 2020 at 11:59 PM – the final date they will be able to file a claim against the Diocese per an order issued by the bankruptcy court today.

Last fall, the Catholic Church took unprecedented action when the Diocese of Rochester filed for bankruptcy, becoming the first New York Diocese in history to undergo bankruptcy proceedings following a wave of child sex abuse lawsuits made possible by the Child Victims Act. This groundbreaking law, which took effect on August 14, 2019, opened a one-year “lookback” window that allows previously time-barred survivors of childhood sexual abuse to seek justice regardless of when their abuse occurred. Dozens of lawsuits have been filed against the Diocese of Rochester since the window took effect.

“This deadline is the main reason the Diocese filed for bankruptcy.  If someone fails to file a claim by the deadline then any claim they may have against the Diocese will likely be forever barred,” said Michael T. Pfau, a sexual abuse attorney at Pfau Cochran Vertetis Amala (PCVA), who has represented thousands of abuse survivors and who has played a key role in major bankruptcy proceedings against Catholic Dioceses in other states. “This is the one chance we will have to finally hold the Church accountable for the decades of abuse that occurred within their walls and under their watch. It is critical that Rochester survivors come forward, seek legal counsel, and finally secure the justice they have long deserved.”

PCVA has represented hundreds of abuse survivors in substantial and complex bankruptcy proceedings around the country, including the Spokane Diocese, the Pacific Northwest Order of Jesuit Priests, the Christian Brothers of Ireland, and the Milwaukee Archdiocese. In bankruptcy proceedings for the Oregon Province Society of Jesus, PCVA represented almost 140 survivors in one of the largest Catholic clergy settlements in the nation.

“Since last August, dozens and dozens of survivors have stood up and made their voices heard against the Diocese of Rochester. The time is now for more to come forward and send a message that powerful institutions will no longer cover up the worst crimes without consequence and accountability,” said James Marsh of the New York-based Marsh Law Firm.

PCVA and Marsh Law Firm have filed lawsuits on behalf of survivors against the Rochester Diocese and the following local entities: