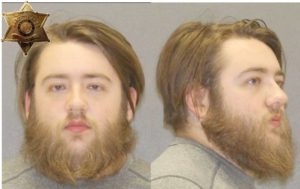 AVON – A Brighton resident was arrested on a felony criminal mischief charge for allegedly scratching a derogatory word into his ex-girlfriend’s car.

According to a press release from Sheriff Thomas Dougherty, Zachary Hunt, 21, was arrested for felony Criminal Mischief in the Third Degree.

On June 2 at 5:30 p.m. a victim phoned the Livingston County Sheriff’s Office and advised that someone had scratched a derogatory word into the paint of her vehicle.

Through the course of the investigation, Deputies came to suspect Hunt. On June 8, he was located by Deputy Michael Williams and taken into custody without incident.

He was transported to Central Booking at the Livingston County Jail for processing and pre-arraignment detention.

Hunt was arraigned on June 9th in the Town of Geneseo due to no Avon Justice being available.

Assisting in the investigation was Deputy Michael Donals also of the Road Patrol Division.