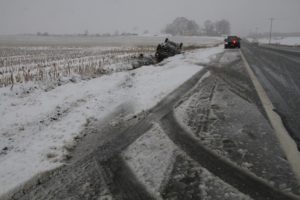 LIVINGSTON COUNTY – Multiple vehicles off the road are being attributed to deteriorating road conditions during Tuesday’s snow.

According to first responders at the scene of a rollover accident on Telephone Road in Caledonia, multiple emergency calls went out for vehicles off roadways Tuesday afternoon.

NYS Police said that the driver of a minivan hit an especially slushy patch on Telephone Road, lost control of the vehicle, ran off the road and overturned at about 1:18 p.m.

The driver eventually was freed of the vehicle without injuries.

Responding State Police canceled the call for the fire department because the woman in the minivan was clearly unhurt. She was checked by a Livingston County Ambulance crew.

“Geneseo: Sheriff Dougherty is asking the traveling public to please use caution on the roads this afternoon,” posted the Sheriff’s Office to Facebook and Twitter. “As the snow continues to fall, the streets and highways are becoming slick. During the past 30 minutes we have had an increase in disabled vehicles and motor vehicle accidents.” 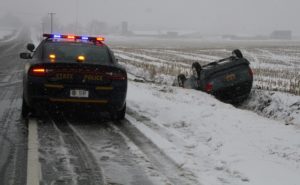 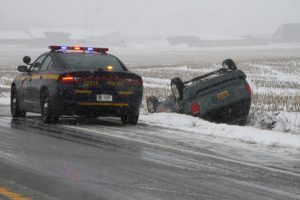 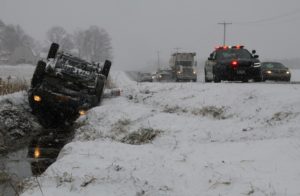