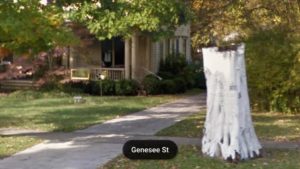 AVON – For the first time since World War II, Genesee Street’s most famous tree stump is not at its post. The ‘white oak’ (which was not an oak) has watched many people come and go through the village but was reportedly too rotten to safely stand any longer.

When a large limb from a neighboring tree fell during the powerful wind storm during Corn Fest on Aug. 13, the base of the tree was found to be badly rotted and barely able to support the trunk. With the consent of the new owner of ‘the Strasenburgh House,’ the Village of Avon removed the tree on Aug. 15.

“It became an issue of public safety,” said Avon Mayor Tom Freeman. “It was badly rotted and easily pushed over. Many people in the community certainly remember it being there for many, many years.”

Strasenburgh family members cleared up a few myths about the tree on social media, explaining that it was not an oak but a locust, known to be rot-resistant. Paul Strasenburgh, who operated Strasenburgh Insurance out of the house’s basement, hung his insurance sign on the tree. When the tree died and had to be cut in 1940, he asked that it be cut above the sign, and later painted it white.

Residents posted memories of the tree.

“Not the White Tree!!! The Westfall grandchildren could only go as far down the sidewalk as the white tree and then we had to turn back,” posted Carolyn Rodwell Jennings. “A landmark, for sure.”

“That was certainly there 50 years a go when I was little,” posted Ted Van Son. “I looked for it every time I dove down that street. Sad day…”

“I recall a ‘Stras’ story regarding the Tree…when New York State passed a mandatory seatbelt law…..there [were] soon spotted two seat belts (cut from their auto) dangling from a nail on the tree…as a form of protest,” posted former Avon Mayor Richard Burke.

Unfortunately, the tree has most likely seen the last of its standing days.

“The tree is definitely memorable, ” said Freeman. “Unfortunately, to move and preserve a statue or a monument is one thing, but a tree will not last forever.” 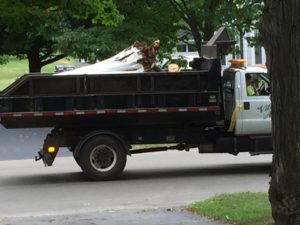 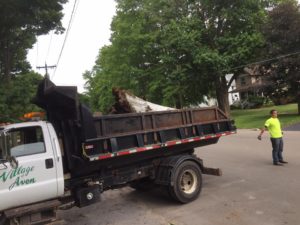