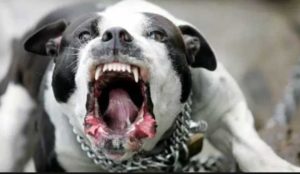 Carl Groth, manager of Salvatore’s Old-Fashioned Pizza in Avon, was making a delivery on Saturday, Oct 16,  to a home in Rush when he was attacked by three large dogs, with injuries severe enough to send him to Strong Memorial Hospital.

According to Groth, the pizza was ordered and paid for online, and since he was short-staffed, he decided to deliver the pizza himself, to an address on East River Road in Rush. He went to the house in Rush, knocked on the door, and left the pizza on the porch.  He said he intended to call the woman from his car to tell her it was there as soon as he got to his car, but she opened the door before he got to the car, and three large dogs came rushing out. One grabbed his arm, and a second grabbed his leg, trying to pull him down. The third was also in “attack” mode.

Groth screamed to the woman for help, but according to him, she did nothing. “She didn’t tell them to stop, or come back, or try to get them off or anything,” said Groth. “But I knew if I fell, they’d be right on top of me, and tear me limb from limb.”

He managed to make it back to the car where he was able to back out of the driveway and call 911, and get help.  He was transported to Strong Memorial Hospital for multiple dog bites to the arms and legs. When a Monroe County sheriff responded an hour later to investigate, the dogs were outside and the owner was unreachable by phone. The deputy did not get out of the car due to the danger, and the owner of the house was not answering calls. Monroe County dog control says there are no licensed dogs at the residence.