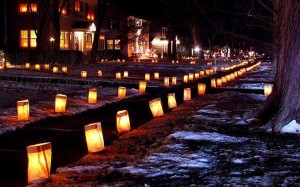 AVON – The luminaries are returning to sidewalks in the Village of Avon in the hopes of continuing a once-lost tradition.

Miron said that he will be handing out luminary packages for the next two Sundays from 9 a.m. to noon at the Lions Club Barns by the Genesee River.

The kits cost $2 for a kit of 10. Kits include 10 white paper bags, 10 tea lights, and a bag of stone dust, but village residents are also encouraged to make their own out of jars, milk jugs, or ‘anything that will safely emit a soft glow when placed outside.’

All raised funds are to go to the Avon Food Pantry. Miron added that he is accepting perishable foods at pickup locations.

The tradition began decades ago but dwindled due to a lack of centralized planning. Miron and volunteers brought the luminaries back starting in 2015. 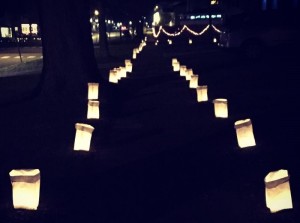