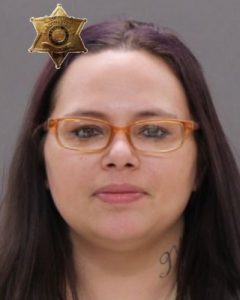 Sheriff Thomas J. Dougherty reports the arrest of an Avon resident on felony charges following an investigation by the
Sheriff’s Office.

On December 31st, 2021 Deputy Brad Little responded to a business on Main Street, in the Village of Livonia, for the report of a cell
phone that had been stolen from the store.  It is alleged through the investigation that Melinda E. Torres, age 34 from Avon, NY, did steal the cell phone, which was personally owned by an employee, while in the business. During the investigation, it was also discovered and alleged that Torres stole additional merchandise while inside the store. The stolen property was recovered during the investigation.
Furthermore, the investigation alleges that Torres had been operating a vehicle during the incident. A records check revealed that
Torres’ driving privileges in NYS had been revoked, including a total of 19 revocations/suspensions. It was also discovered that
Torres had an active arrest warrant for a previous Violation of Probation.

Torres was arrested and charged with felony Grand Larceny in the Fourth Degree, Petit Larceny and felony Aggravated Unlicensed
Operation in the 1st Degree.

Torres was transported and turned over to the Central Booking Deputies at the Livingston County Jail for processing and prearraignment detention. The District Attorney’s Office was contacted in regards to bail due to the felony level charges. It was
recommended that Torres be released on her own recognizance as the charges did not qualify for bail under the NYS Justice Reform
Act.

The Livingston County Public Defender’s Office was present and represented Torres at the court arraignment for her defense. The
Livingston County District Attorney’s Office was notified but did not appear to represent the people.
Assisting with the investigation for the Sheriff’s Office was Deputy Jerry Pilkenton. The incident was handled under the command
leadership of Sergeant Caleb Cutting.