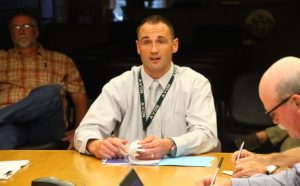 AVON – Avon Central Schools, the Village of Avon, and the Town of Avon have agreed to split the costs of keeping Avon Police Officer Matthew McFadden as a School Resource Officer (SRO).

“We will have to take on a cost but we think it’s worth it to have a full-time officer at the school,” said Avon Mayor Tom Freeman. “If the district were to use a Deputy then their cost would be $75,000.”

The arrangement is designed to cover the $75,000 annual salary for the SRO. As of June 2017, Livingston County will no longer supply a $25,000 SRO grant, citing equity issues.

York, Livonia, Dansville and Keshequa each employ one Livingston County Deputy Sheriff and pay about $70,000 to the county per year for this. Cal-Mum, Avon, Mount Morris and Geneseo, however, used to receive $25,000 apiece from the County to help pay a member of their village police department a similar salary as an SRO.

County Administrator Ian Coyle said that the County cannot justify paying some school districts to have local SRO’s and accepting money from other districts to use Deputies.

No change in SRO status will occur at York, Livonia, Dansville and Keshequa.