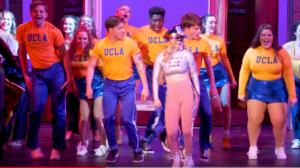 For two weeks at the end of February “Legally Blonde The Musical,” played at Coastal Carolina University. Among the students casted included Makenna Hughes, a BFA Musical Theatre major from Avon.

The play was directed by Jason Gillman, an original Broadway cast member.

Based on the Hollywood film, the story follows Elle, a sorority-girl-turned-Harvard-law-student in pursuit of winning back her ex-boyfriend, Warner. As she tackles stereotypes and scandal in school and the courtroom, Elle must successfully defend exercise queen Brooke Wyndham in the murder trial of her life.