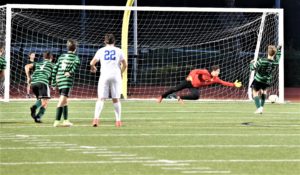 Avon held on for a 2 to 1 victory to take the season opening game at Avon home field.  Both Avon goals were by #2 Lee Hartke. Avon lead 1 to 0 after Hartke’s goal midway through the first half.

Geneseo tied the score 13 minutes into the second half off a corner kick from #10 James Hy to a head goal by #14 Ethan Bennett.

The game decider was at the 70 minute mark after a Geneseo defensive error in the box lead to a penalty kick by Avon #2 Lee Hartke against Geneseo Goalie #1 AJ Agosto.

Agosto had his finger tips on the shot but could not stop the game deciding goal.