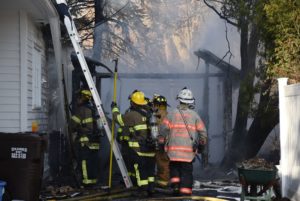 According to first responders at the scene, an emergency call reporting a structure fire in a garage went out shortly after 2 p.m.

One person was home at the time of the fire. No one was injured.

The garage where the fire apparently started was a total loss. At one point, the fire was thought to be threatening both houses nearest to the garage, but only the rear of one house suffered some damage from the fire.

Thin smoke hung in the air as firefighters and the Office of Emergency Management and Avon Police Department cleaned up and investigated the cause.

The scene was within sight of Avon Central School.

Firefighters with the Avon and East Avon Fire Departments responded to the scene. Avon initially called for on-scene mutual assistance from Caledonia and Rush but later cancelled Rush and requested that Caledonia fill in at Avon’s quarters while they were at the scene. 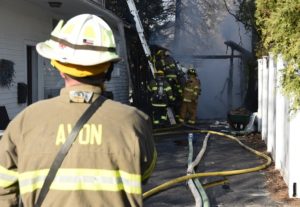